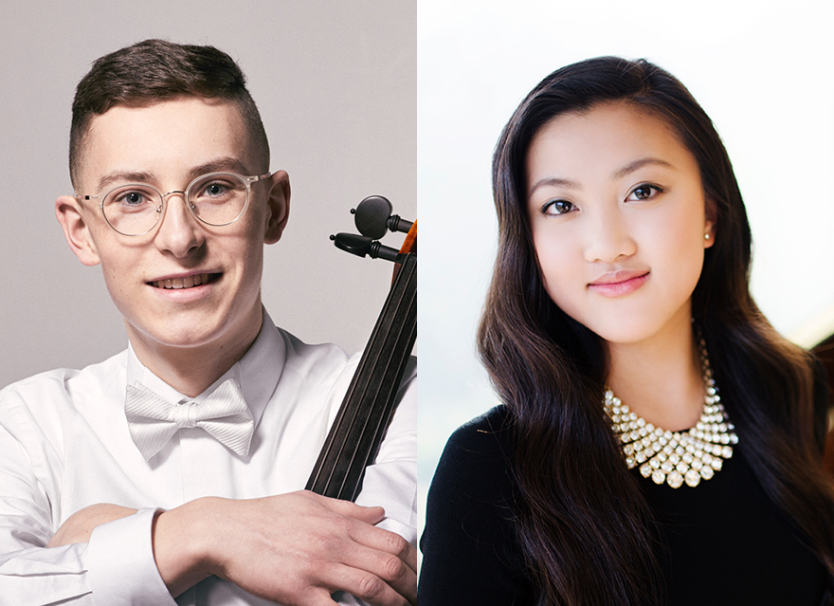 Liam&LaLa is a cello/piano duo composed of two of Canada’s brightest young talents, cellist David Liam Roberts and pianist LaLa Lee. The duo are dedicated to innovative programming and unforgettably engaging performances. In November 2020, they made their recital debut for Cecilia Concerts at the Lilian Piercey Concert Hall in Halifax, to great acclaim. Despite having formed under the extraordinary circumstances of the ongoing pandemic, the duo has quickly developed a unique and exciting artistic voice.

Individually, David Liam and LaLa are both establishing themselves as two of the most promising emerging Canadian musicians. David Liam is the winner of the 1st Prize and Grand Award at the 2018 National Music Festival of Canada as well as the esteemed 2020 Michael Measures 2nd Prize, while LaLa performs extensively throughout China and Canada and has played concerti with orchestras including the Shanghai Philharmonic, Xiamen Philharmonic Orchestra, and Symphony Nova Scotia. Both artists have been featured on CBC’s list of Canada’s 30 Top Classical Musicians Under 30 and are recipients of The Royal Conservatory’s most prestigious scholarships.

Reserve your ticket online or at the box office.

Winner of the 1st Prize and Grand Award at the 2018 National Music Festival, David Liam Roberts is establishing himself as one of the most exciting Canadian cellists of his generation. Named one of Canada’s “30 Hot Classical Musicians under 30” by CBC in 2019, David Liam is known for his extraordinary technique and sincerely communicative performances. He is the 2020 recipient of the Michael Measures 2nd Prize, awarded by the Canada Council for the Arts and NYO Canada. David Liam was awarded 2nd Prize at the Women’s Musical Club of Winnipeg’s 2018 Doris McLellan Competition, after a performance of Dvorak’s B minor Cello Concerto as soloist with the Winnipeg Symphony Orchestra. After winning the grand prize of the Winnipeg Music Festival on his fourteenth birthday, the Winnipeg Free Press praised him as “prodigiously gifted… displaying an artistic sensibility well beyond his tender age”.

2020-21 engagements have included a solo appearance with the Winnipeg Symphony performing double cello concerti with Yuri Hooker (under Maestro Daniel Raiskin), Halifax debut recitals with pianist LaLa Lee for Cecilia Concerts, recorded concerts presented by the Women’s Musical Club of Winnipeg (as part of the Zyra Trio) and Virtuosi Concerts (with Yuri Hooker), and appearances at the Lunenberg Academy of Music Performance, Nova Scotia.

Originally from Winnipeg, the Métis cellist now studies with Hans Jørgen Jensen and Andrés Díaz at the Glenn Gould School (GGS) of the Royal Conservatory of Music, where he holds the Chisholm full scholarship and is supported by the Manitoba Arts Council. At the GGS, he has performed as principal cellist of the Royal Conservatory Orchestra, working under conductors such as Tania Miller and Andrei Feher. During the 2017-18 season, he was a frequent substitute cellist for the Winnipeg Symphony Orchestra. During the summer of 2019, he toured Canada and Spain as co-principal cellist with the National Youth Orchestra of Canada (NYOC) and was the recipient of the Gail Asper Foundation $5,000 Award of Excellence. As a soloist, David Liam has performed concerti with the Winnipeg Youth Symphony Orchestra and the Winnipeg Symphony Orchestra (on several occasions).

During the summer of 2018, he was one of only two Canadian cellists participating in the international Morningside Music Bridge program and festival in Warsaw, Poland. He has had lessons and masterclasses with many of the world’s foremost cello pedagogues, having attended Morningside Music Bridge for four summers and the Meadowmount School of Music during the summer of 2016. While in Winnipeg, he was a student of Yuri Hooker for eight years.

Since 2016, David Liam has been a leader of the “Back to BACH” Project, a global non- profit organization to inspire and encourage children to learn musical instruments and to instill in them a love of music. Passionate about educational outreach, he is currently serving as a Global Operations Director with the organization and is the co-Director of the Toronto region.

David Liam plays a Ruggieri-model cello that was made for him in 2017 by Winnipeg luthier, Garth Lee.

Praised for her sensitive expression and profound understanding of music, LaLa Lee is described by Juno Award winning composer Dinuk Wijeratne as “undoubtedly a talent to watch”. The 21-year-old pianist has delighted audiences worldwide with solo, chamber, and orchestral performances and was named as one of CBC’s 30 Hot Classical Musicians under 30. In the past, she has been invited to perform at a private function for Renée Fleming and Alexander Shelley and was a Featured Artist at the Scotia Festival of Music where she collaborated with Phil Myers, former Principal Horn of the New York Philharmonic.

In celebration of the 250th anniversary of Beethoven’s birth, LaLa gave a recital entitled “Beethoven’s Birthday Bash” at Mazzoleni Hall featuring only his works and performed two violin sonatas with her duo partner in a Beethoven Violin Sonata marathon concert at the Concerts@100 Series. Despite the pandemic, she continued the year-long celebration with two more all-Beethoven recitals at the Lunenburg Academy of Music Performance’s Beethoven Festival in October. She also gave four recitals for Cecilia Concerts and will perform Beethoven’s 4th Piano Concerto with Ensemble Testori in Milan, Italy as well as Mozart’s Piano Concerto No. 21 with Mandle Philharmonic in Toronto.

Despite her young age, LaLa has performed with many great musicians including conductors Bernhard Gueller, Muhai Tang, Dinuk Wijeratne, and Daniel Bartholomew-Poyser. She has played with orchestras including the Shanghai Philharmonic, Xiamen Philharmonic Orchestra, Symphony Nova Scotia, Nova Sinfonia, and Chebucto Symphony Orchestra. In 2018 alone, LaLa was the youngest finalist at the SteppingStone Competition; gave an extensive recital tour across 4 cities in China over 5 days for the China International Music Festival; performed in halls such as the Shanghai Oriental Arts Centre, Shanghai Symphony Hall, and Hefei Grand Theatre, Poly Culture Group; and taught her first masterclass at the Changzhou Music School.

LaLa is regularly programmed at concert series such as Cecilia Concerts and The Music Room Chamber Players Series. She has been featured in recitals at Morningside Music Bridge, Orford Music Festival, and Scotia Festival of Music. LaLa has had the distinct honour of performing in masterclasses for Martha Argerich, the late Leon Fleisher, Scott St John, and Andrew Armstrong; and has worked with Janina Fialkowska, Denise Djokic, Walter Delahunt, and Tim Fain. Since the age of 5, she began playing fundraising concerts for the IWK Children’s Hospital and Foundation, The Great Big Dig, Nova Scotia Youth Orchestra, and Gilda’s Club.

Originally from Halifax, Nova Scotia, LaLa is currently studying to earn her Bachelor’s of Music (Honours) at the Glenn Gould School of Music, in the studio of John Perry and David Louie. She has been awarded the prestigious Henry Hung Foundation full scholarship and stipend. From the age of three, LaLa began learning piano, studying at the Maritime Conservatory of Performing Arts and with Lynn Stodola of Dalhousie University. When she is not found at the piano, LaLa enjoys baking, writing, and being outdoors.