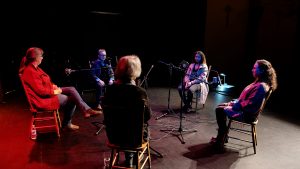 A three-part series of conversations about heritage, community and connection from the unique perspectives of four women - all mothers and artists - from Nova Scotia’s four founding cultures. They talk about their interconnected histories, hardships, and hopes for the future here in Mi’kma’ki. It's a deep dive into Reconciliation, Resilience and Reinvention. Meet: shalan joudry, narrative artist; Nadine Belliveau, visual artist; Brenda Thompson, author; and Micha Cromwell, actor. A project of King's Theatre in Annapolis Royal, Nova Scotia.

This project was made possible thanks to support from the Canada Council for the Arts.

shalan joudry is a narrative artist working in many mediums. She is a poet, playwright, podcast producer, oral storyteller and actor, as well as a cultural interpreter. Her first book of poetry, Generations Re-merging, was published by Gaspereau Press (2014) and her second book, Elapultiek, was published by Pottersfield Press (2019). Her next collection of poetry, Waking Ground, is also coming out with Gaspereau Press (fall 2020). Shalan has shared her poetry, oral storytelling and drum singing with numerous stages, events, schools and organizations for the past decade. Shalan also facilitates cultural and ecological professional development workshops. She lives in her home territory of Kespukwitk (southwest Nova Scotia) with her family in their community of L’sətkuk (Bear River First Nation).

Nadine Belliveau is a visual artist from the acadian region of Baie Sainte-Marie, Digby County, Nova Scotia where she has been creating professionally since 1971. A graduate of NSCAD , of Université de Moncton & Université Sainte-Anne, her contribution to the arts has been as an artist, as an educator at the community, school and university levels , as a founder of two galleries, as member of art associations, as past treasurer of ARCAC, as past chair of the Association acadienne des artistes de la Nouvelle-Écosse and as past representative of the south west regional members of VANS. She is an active member of Le Conseil des Arts de La Baie and of the Annapolis Artist’s Way Collective. Her paintings explore the essence of nature by means of abstraction and decorative expression and unveil the mysterious, immersive qualities of nature presenting their inviting and warm environments through textural, layered and large-format acrylic on canvas. Her work can be seen on her web site or by appointment at her Belliveau Cove studio. She has recently shown her work in Nova Scotia, Montreal, Vancouver and Toronto.

Brenda J. Thompson is a 9th generation Nova Scotianer with her family coming to this province as Hugeonauts. Brenda has a B.A. in Women’s Studies from Mount Saint Vincent University and an M.A. in Sociology from Acadia University. She has written several plays that have been performed as well as one fiction and three non fiction books, two of which have won awards. Brenda is currently writing several more books and plays and running her own publishing company, Moose House Publications.

Micha Cromwell is an actress based in Nova Scotia. She is a Merritt Award nominee for an Outstanding Performance in a Supporting Role. Micha has performed at the National Arts Centre in Ottawa, as part of the award-winning production Chasing Champions (Ship’s Company Theatre) as well as The Westwoods (Mulgrave Road Theatre). She has worked on various CBC productions including Diggstown, and Mr.D. Micha is a descendant of the Black Loyalists and holds a degree in History from Dalhousie University.